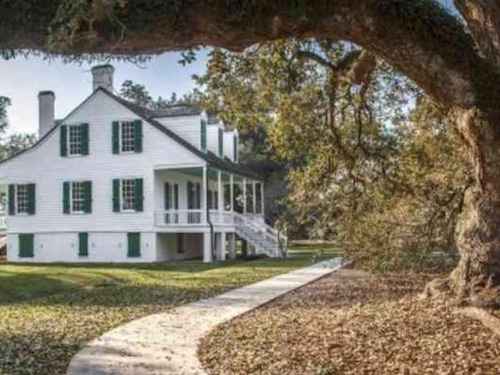 E D White Historical Site is in fact a National Historic Landmark, so if you LOVE history, then you are in luck!

Situated on the banks of the scenic Bayou Lafourche, this grand property was once the residence of two of Louisiana's foremost political figures in the 19th century - Edward Douglas White, and his son, Edward Douglass White (yes kids, they were their names!)

The E D White house was built was hand-hewn cypress around 1825, and is an incredible example of Creole plantation architecture and traditional construction.

Inside, you can see how the main floor reflects the typical symmetry of Greek Revival architecture, and how the high ceilings provided relief from the state's hot summers.

The first residents on Bayou Lafourche were American Indians, and at the E D White Historical Site you can learn all about their stories, and how they might have arrived as early as 500 AD. You can also learn about how in the late 19th century, Acadians sought a new home after they were deported from Canada by the British.

You can also learn about how the sugar cane industry grew rapidly in the early 1800s, and how production changed in the 20th century.

There is SO much history to be uncovered at E D White House, you might just have to go and visit it for yourselves to experience it all!

They have fun events at the home, like Kids Under the Oak where it's a day of hands-on activities, art & storytime!

Great things to do with kids near me in Thibodaux

They offer field trips so give them a call to arrange!

If you have special needs, contact staff before your visit

Other great things to do with kids near to
E.D White Historical Site