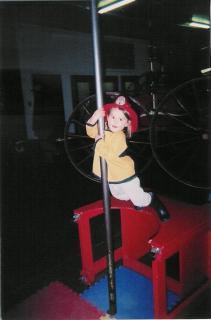 The Denver Firefighters Museum is located in historic Denver Fire Station No. 1. The building was constructed in 1909 for Engine Company No. 1 by Glen W. Huntington, noted Denver architect, as one of the largest fire house ever built in Denver. The building served as a working fire station until 1974. The building was designated a Local Landmark on February 11, 1974 and listed on the National Register of Historic Places on November 14, 1979.

Follow the bootprints of a firefighter on a tour of the Museum. Learn about the equipment firefighters used, how firefighters used horses and dogs to help fight fires, see real fire trucks and utilize more than 20 hands-on activity stations designed to instill fire safe behaviors.

The Museum does not have parking. The best parking option when visiting the museum is metered street parking. There are meters on both sides of the street throughout the immediate area that cost $1 per hour with a 2 hour limit.

Food and drink are not allowed in the Museum. However, the outdoor pedestrian 16th Street Mall is just two blocks away with a variety of eating options.

Great things to do with kids near me in Denver

From 1-25: Exit Colfax and head east. Turn left onto Glenarm. Right on 14th Street.(one way) Right on Tremont Place.(one way) Museum is on the left side of the street. 1326 Tremont Place

The museum offers many resourses to educators on our website. School groups are always welcome, please call the museum to reserve a time!

The Denver Firefighters Museum has a gift shop that is full of one-of-a-kind fire themed gifts. You can also shop online.

The first floor is entirely accessible, including restrooms, however there is no elevator to the 2nd floor due to the historic nature of the building. Training dogs are welcome at the Museum. Strollers are permitted.

Changing tables are located in all the restrooms.

10am to 4pm.vMonday to Saturday, closed major holidays

Denver Museum Of Nature and Science