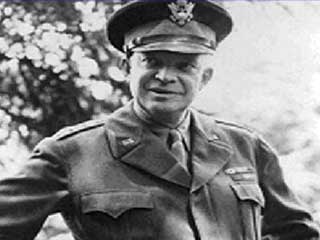 Built by the Eisenhower Foundation, with funds raised through public gifts, the Eisenhower Presidential Museum is constructed of Kansas limestone. Originally dedicated on Veterans Day in 1954, the Museum was built to house the materials and objects related to Dwight D. Eisenhower's life. It contains over 30,000-square feet of gallery space, with exhibits showing not only the fine art objects collected by and given to Eisenhower but also the story of his careers as military leader and President of the United States.

A typical nineteenth century home, the Eisenhower family occupied this house from 1898 until Mrs. Eisenhower's death in 1946. Her sons gave the house, on its original site, to the Eisenhower Foundation which maintained it until it was given to the Federal Government in 1966.

David and Ida Eisenhower purchased their home on South East Fourth Street from David's brother, Abraham Lincoln Eisenhower. The family moved into the six-room home in late 1898. The title changed from Abraham to Ida on April 4, 1899 for the sum of $1,000. Ida in turn sold the house to David for $1.00 on May 18, 1908. The real estate consisted of all but two lots of the block bordered on the west by Chestnut (now Kuney) Street, the east by Olive Street, north by South East Third Street and the south by South East Fourth. The Eisenhower property had between two and one-half and three acres which contained the house, a large barn, a chicken house, a smoke house, an outhouse, an orchard, a strawberry patch, and a large garden located to the east of the house.

In 1900, Grandfather Jacob Eisenhower moved in with David, Ida and their six sons. At that time, two bedrooms and a walk-through closet were added to the east side of the house. The new south bedroom was used by David and Ida, with Jacob using the smaller north bedroom. Jacob lived with the family until his death in 1906.

The north bedroom was converted to the indoor bathroom around 1908. The last addition to the Eisenhower home consisted of a small kitchen, pantry and an enclosed back porch added in 1915. The home is furnished as it was at the time of Ida Eisenhower's death in 1946. The furnishings are original to the home although some have been moved to accommodate visitors touring the home. The wallpapers in the two parlors, dining room and hallway are identical to the papers in the home in 1946.

Ida Eisenhower was the last person to ever live in the house. It has been opened to the public since early 1947, originally as a World War II Veterans Memorial and now as the boyhood home of Dwight David Eisenhower, 34th President of the United States.

A self guided tour of the Boyhood home is available in Spanish upon request.

The Place of Meditation

Designed by James Canole, Kansas State architect, it is built of native limestone quarried in Cottonwood Falls, Kansas, and features chipped glass windows designed by Odell Prather, Philadelphia, Pennsylvania. The windows were constructed by Conway Glass Studio of Winona, Minnesota. The marble used in the crypt is Arabian Travertine from Germany, Italy, and France.

There is a meditation portion of the building where, according to General Eisenhower's wishes, it was hoped that visitors would reflect upon the ideals that made this a great nation and pledge themselves again to continued loyalty to those ideals. The Place of Meditation was built with private funds under the auspices of the Eisenhower Presidential Library Commission.

Over 10 Museums and Attractions in Abilene to see, so spend the weekend.

Great things to do with kids near me in Abilene

TRAVELING TO ABILENE: Abilene is located on Highway I-70 approximately 150 miles west of Kansas City and 120 miles north of Wichita. The Eisenhower Presidential Library & Museum is located about 2 miles south of I-70 on K-15.

Working With Primary Sources: Onsite research experiences for secondary students may be tailored to the needs of the students and the requirements of the class. Teachers who would like more information about bringing a class of students to the Eisenhower Presidential Library for original research should contact the archives staff. Primary Sources: The manuscript collections and audiovisual archives contain many documents and photographs that may be useful to students working on historical papers, exhibit projects, History Day projects, and media or dramatic performances. Scanned copies of original documents and photographs relating to topics such as the development of the Interstate Highway System, the Salk Polio Vaccine, World War II, the Jewish Holocaust and many more are included in the Online Documents section.

We have many artisan stores for shopping and lots of antique stores.

Other great things to do with kids near to
Eisenhower Pres. Library Museum and Boyhood Home