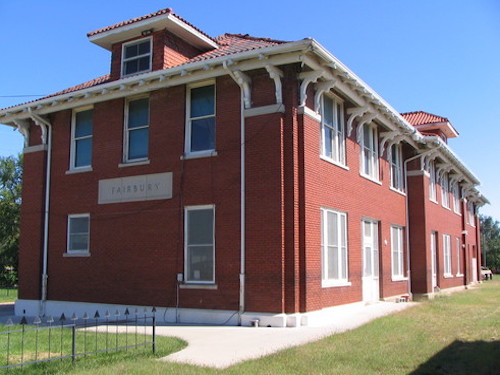 The Rock Island Depot Railroad Museum is located in one of the state's two intact Rock Island depots, so already you are surrounded by history!

Rock Island Depot Railroad Museum brings railroad history to life, and gives visitors a look at life when trains were the fastest and classiest way to go anywhere, from the billowing steam engine to the 1950's stream-lined Rock Island Rocket.

Kids can learn all about the inspiring men who made the Rocket race across the country, as they learn about the life of a railroader!

It's was such a thriving industry, that Rock Island employed nearly 1,300 people along in Fairbury in the 1920's. Even two Presidents traveled through Fairbury on the Rocket! (Do you know who?)

The main floor of the Rock Island Depot has been restored and here you will find the museum, and make time to check out the baggage room as it looks just as it did when the depot closed its doors in the 1980s.

The second story served as offices, and today features a model railroad display, as well as a historical library.

The railroad adventure isn't just in doors at the Rock Island Depot Railroad Museum - the grounds still feature the original freight house, as well as a garden that was a showpiece in the 1920s and 30s. Don't miss the "Little Blue Railroad" either - a scale model railroad, that you an ride in the summer months!

Railroad history comes to life in Nebraska - so all aboard!

Great things to do with kids near me in Fairbury

There is a gift shop on the downstairs floor to pick up items related to the railroad and history!

Give them a call to ask about the accessibility