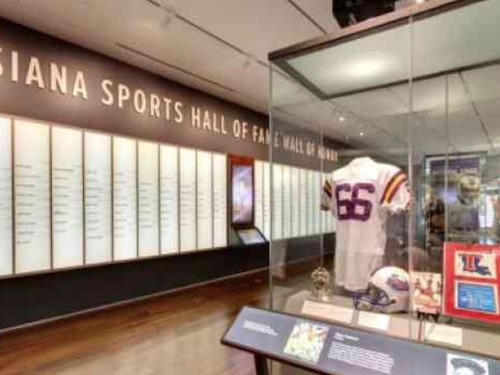 Be prepared to be inspired as we explore the Louisiana Sports Hall of Fame, before going back in time through 3,000 years of history at the Northwest Louisiana History Museum - yes kids, two museums in one!

Kids can marvel at the accomplishments that have been achieved by Louisiana athletes, coaches and sports stars in across a series of exhibits with an impressive museum complex.

The exhibits and interactive media trace the history of sports in the state, as well as highlight the importance of sports to life in Louisiana.

Don't miss the HD videos that capture in-game drama and excitement, and touch-screens where you can learn about sports stars' life stories, colorful quotes and career stats.

Some of the inductees including Shaquille O'Neal and Archie Manning whom you would know, but some notable figures are just as important to history and yet their names might not be as well known like New Orleans-born Audrey "Mickey" Patterson who was the first African-American women to win an Olympic medal - pretty impressive!

From the fastest car in the world, to a football signed by all 53 New Orleans Saints, the Louisiana Sports Hall of Fame is filled with amazing artifacts and stories, and you never know kids, one day YOUR name might be on those walls!

Is it time to go back in time? Great, because next stop is the Lousiana History Museum!

Over 3,000 years of history is brought to life, with exhibits on how unique cultural traditions survive and thrive today.

Kids can learn about how diverse groups, such as the Caddo Indians, French and Spanish settlers, free and enslaved Africans and Southern white folk, all created the region's distinctive culture.

There are artifacts dating back to the 1700s, exhibits that celebrate explorers and entrepreneurs, exhibits that showcase handicrafts and flourishing subcultures, and even those whose original began in colonial Natchitoches!

Sports, history and a great family day out in Louisiana!

Ask about their scavenger hunts!

Great things to do with kids near me in Natchitoches

They offer FREE school group visits if you meet the criteria, so give them a call to discuss!

If you have special needs, give the museum a call before your visit