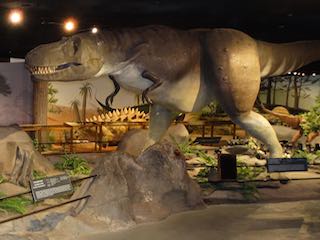 Las Vegas isn't all about casinos! Nope - in fact, there is a host of family fun to be had, and one of those adventures is a day at the Las Vegas Natural History Museum!

Kids of all ages will love the exhibits here, as they cover a host of topics that will engage and educate!

Exhibits include the Treasures of Egypt, where kids can find out how the amazing archaeologists in the early 20th century uncovered some of the most amazing treasures that we know today - in particular the tomb of Tutankhamun!

Have you ever wondered what can be found in the depths of the ocean? In the Marine Life Gallery, there are LIVE sharks and stingrays can be found in the tank. There are also a number of other live animals in this section, including pythons, snakes, scorpions, and lizards - so if you love the creepy crawlies, you might just want to head here!

Kids can learn all about the African Rainforest, as well as prehistoric mammals such as the giant ground sloth and saber-tooth tiger.

Make sure you don't miss the 35 foot long T-Rex animatronic - that actually lowers it's head and roars at them! ROAR! Can you imagine what it would have been like to actually live in the age of the dinosaurs? Pretty scary we imagine!

Kids can also explore which dinosaurs would have been around in Nevada during this historic time.

The Las Vegas Natural History Museum is a great way to get out of the Nevada heat, and spend a day with dinosaurs, live animals, Ancient Egyptians and so much more!

Why not have a birthday party at the museum! Kids get museum activities and party time, and the birthday child get a shirt too!

There are plenty of places to eat in Las Vegas - so why not fill up before you arrive!

Great things to do with kids near me in Las Vegas

Cross-streets are Las Vegas Blvd. and Washington. The Museum is adjacent to Cashman Center.

They offer field trips with grade appropriate programs where kids can learn all about history, explorers, animals, and the natural world! Give them a call to arrange

Speak to staff about the accessibility of the museum if you have any questions! They will be happy to help